A kid’s life, back in the day

For The Daily Item

NORTHUMBERLAND — The new Children’s Room at the Joseph Priestley House paints a picture of what most of today’s kids’ lives would be like if they lived not in the wealthy Priestley house but in one of the poorer neighboring homes.

“This room is about the neighbor, the poor neighbor,” said Hope W. Kopf, board member of Friends of Joseph Priestley House, home of the scientist best known as the discoverer of oxygen. “What would your life have been like?”

While the Priestley children could dress in elegant clothes, play with whirligigs and hoops with sticks, or learn their lessons and write with a quill and ink, the kids in most Northumberland homes started their day with chores. And they started those chores almost as soon as they were able to walk.

“A lot of the day is spent providing clothing,” Kopf said. “You start by making the thread, then the fabric, then the clothing. All by hand. They had to make their own linen out of flax.”

They also used fibers from hemp, cotton and bamboo.

“Girls as young as six started weaving tape,” Kopf said, referring to what today we would call a drawstring.

Mothers taught their daughters to make tape. Lots and lots of tape. It was used to cinch the waist, neck and sleeves of undergarments. It drew pockets closed — pockets that were tied around the waist beneath outer garments, not sewn into clothing. It held up petticoats, skirts and aprons, and even stockings that reached above the knee. With no zippers, Velcro, or safety pins, the average 17th-century person’s garments were held together with woven tapes, which were also used for many other needs.

Twelve-year-old Gabrielle Seese, who is a current neighbor and frequent visitor of the Priestley House, demonstrated the skill, maneuvering a threaded shuttle through a small, table-top loom that wove 18 pieces of cotton string into a geometrically patterned, blue and white tape. She had to concentrate on the repetitive work or risk messing up the pattern and having to start over again.

The early morning job of emptying the chamber pot usually fell to the children in a family. Among their chores were:

n Clean ashes from the fireplace

n Shovel ashes into the outhouse to control the odor

n Bring water from the well into the house.

Solomon Seese, 8, demonstrated how an 18th-century boy might have carried two, two-and-a-half-gallon buckets of water on a wooden yoke.

“One gallon of water equals almost eight-anda- half pounds,” Kopf said. “So they’re carrying almost 20 pounds of water in each bucket.”

Even without water, the apparatus was clunky and awkward, with wooden buckets dangling from the ropes as Solomon walked. Kids also used the buckets to bring in garden vegetables and fruits — apples, peaches, squash, beans, etc.

The Children’s Room is a hands-on, child-friendly place where today’s kids can see how their lives would have been a couple of hundred years ago, but it’s not limited to youngsters only. All ages can appreciate a child’s life in the 18th century “The Children’s Room is good for adults, too,” Kopf said. 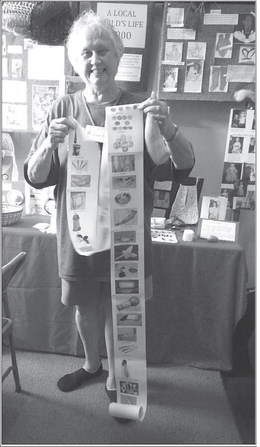 Hope W. Kopf, board member of Friends of Joseph Priestley House, holds a cow horn and a banner depicting items that would have been made from horns, including buttons, knives, a bowl, powder horn and hair decorations.

Click here to see this page in the eEdition: