For The Daily Item

NORTHUMBERLAND - The Joseph Priestley House has created a surprising perspective by establishing a new Children’s Room, which shows what life would have been like ... for neighborhood children. “Probably, if they weren’t rich (like the Priestley children) they lived kind of plainly,” said Gabrielle Seese, 12, who attended the annual summer camp at the Priestley House and who, having the advantage of being a current neighbor of the place, has gleaned details about the divide between the lifestyles of rich and poor children in the 18th century. “The boys would help their dads a lot, and the girls would help their moms a lot.”

Gabrielle’s 8-year-old brother, Solomon Seese, said that if he’d been a neighbor of the wealthy Priestley kids, he probably would have been jealous of “not getting to play because you don’t really get to play.”

But then he said he’d also have

a sense of pride, and though he didn’t have the words to express what he meant, his oldest sister, 17-year-old Tylar Seese, picked up on his feelings.

“I guess in the end, when you had to face the real world, you would be more independent,” Tylar said, adding, “Even today, rich kids that don’t have to work don’t have to learn how to do things.”

And that is the point of the Children’s Room, tucked into the former pantry of the Priestley House and displaying the numerous chores children in the 1700s performed.

“The mission is to give children (today) an idea of what their life would have been like as a neighbor of the Priestleys. Their whole life was spent providing food, shelter and clothing,” said Hope W. Kopf, board member of Friends of Joseph Priestley House. “In my mind, children should know how much work was necessary just to survive back then, so they can appreciate 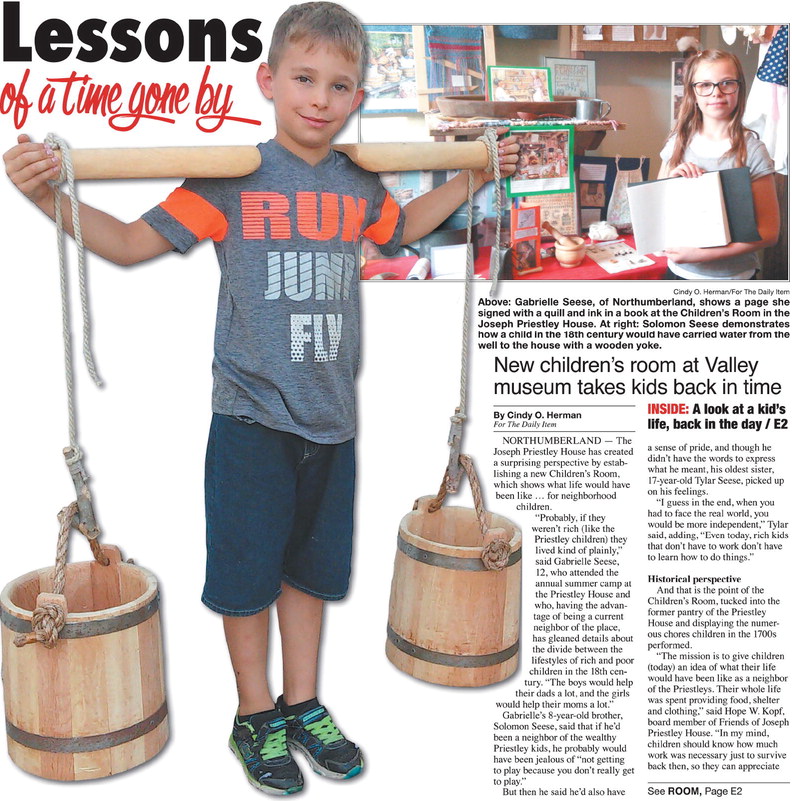 Above: Gabrielle Seese, of Northumberland, shows a page she signed with a quill and ink in a book at the Children’s Room in the Joseph Priestley House. At right: Solomon Seese demonstrates how a child in the 18th century would have carried water from the well to the house with a wooden yoke.

ROOM, from Page E2 how lucky they are now.”

Back then, babies and toddlers, regardless of gender, wore dresses, Kopf said, pointing to a poster with colorful portraits of wealthy young boys in elegant, ankle-length dresses. “Breeching ceremonies,” where the youngsters were first allowed to wear clothing like their father (breeches), occurred between the ages of four and eight — the poorer families typically donned breeches at a younger age.

“Rich fathers didn’t need (their sons) to work in the field,” Kopf said. They could wait to wear breeches, whereas poor kids might have started at four.

A tale of two lives

Even the seven approximately 20-foot-square rooms in the Priestley House show a stark disparity in the lives of the haves and the have-nots.

Children did have toys and play games, but only after they’d finished their daily chores. And if they had the energy for fun by the time the chores were done.

Want an idea of those chores? Stop in at the Priestley House and check out the new Children’s Room. You’ll come away with a new appreciation for things like electricity, indoor plumbing, pre-made clothes and grocery stores laden with ready-to-eat fresh, canned and refrigerated food.

Click here to see this page in the eEdition: